What Is a CMR Document?

Firstly, what does CMR stand for? The term CMR stands for Convention on the Contract for the International Carriage of Goods by Road.

A CMR note is a document that’s used to standardize the conditions of international road transport. It also defines the carrier’s responsibilities and applies to countries that accept the CMR convention. As such, it is a multinational agreement. As of January 2022, 58 states have ratified the convention, and this includes most of Europe.

Having a CMR means that the responsibilities and liabilities of parties when it comes to damages, losses, and delays in international transport are clearly specified. The three parties involved are the consignor, carrier, and consignee.

So what is CMR? It is legal proof that the goods were delivered in good condition. It denotes that transportation followed specific conditions.

Under the CMR Convention, the one who holds responsibility for damage and loss is the carrier itself.

What Does a CMR Document Contain?

A CMR note must include the following information:

How Many Copies of CMR Are There?

The consignor produces the CMR document in three original copies. They must be available for reference during the whole transportation period. The first copy of the CMR document belongs to the consignor, whereas the second will accompany the cargo. The third CMR copy remains with the carrier.

Each CMR party has its own right. The consignor can stop the transportation of the goods or change the delivery location. It can also change the consignee by placing an order with the carrier. This has to happen while the freight is in transit. However, this right ends when the second copy of the CMR reaches the original consignee’s hands.

Consequences of the CMR Convention

Before the CMR convention was implemented, road transportation of goods throughout Europe was complicated, at best. Thanks to the CMR document, there is now a unified system in place. There no longer needs to be different consignment notes for all the countries on the shipping route. The implementation of the convention saves time, money, and effort. Meaning that CMR documents are more secure.

Future of CMR is e-CMR: A Better, Faster and More Efficient Solution

With the advancement of technology comes a better solution to replace menial paperwork. Introducing solution one step closer to e-CMR; in addition to providing a uniform standard for consignment notes, it also features the following:

SuperCMR Is the Solution for All Your Shipping Needs

In this modern era, SuperCMR believes that digitalization is the way, and that includes turning a blank CMR into today’s industry standard. The shipping world will never be the same again, and SuperCMR will see to that. If you’d like to see a CMR document example, just drop us a note. Gone are the days of printing and wasting tons of paper. Don’t get left behind – SuperCMR offers pricing options to suit your every need. Don’t feel pressured to make a commitment right away. Start your free trial today! 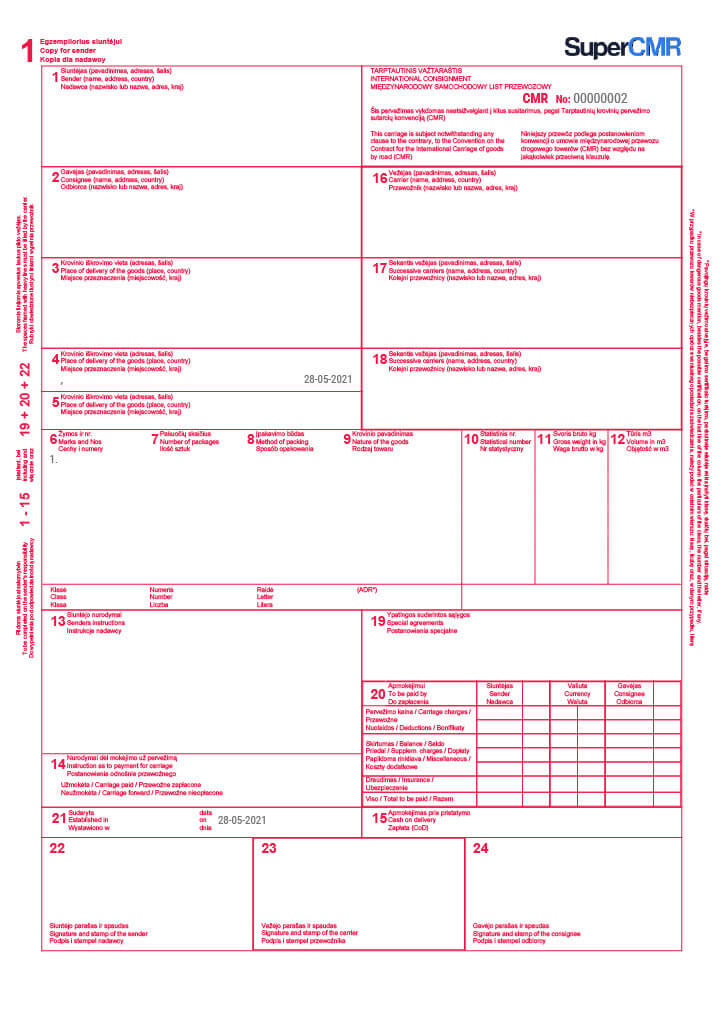 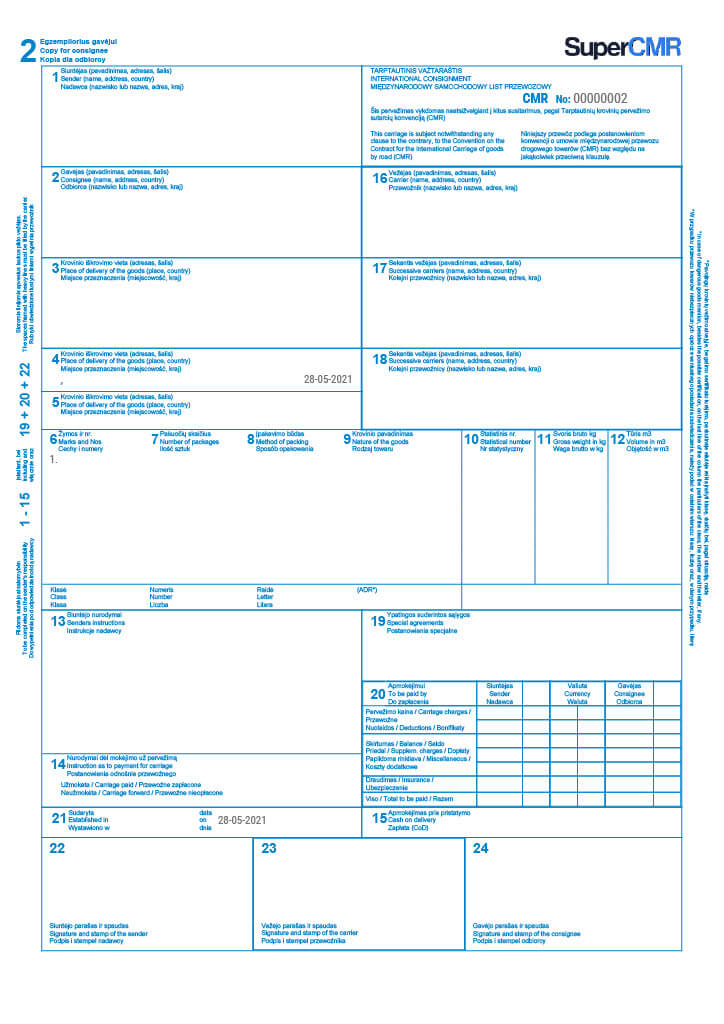 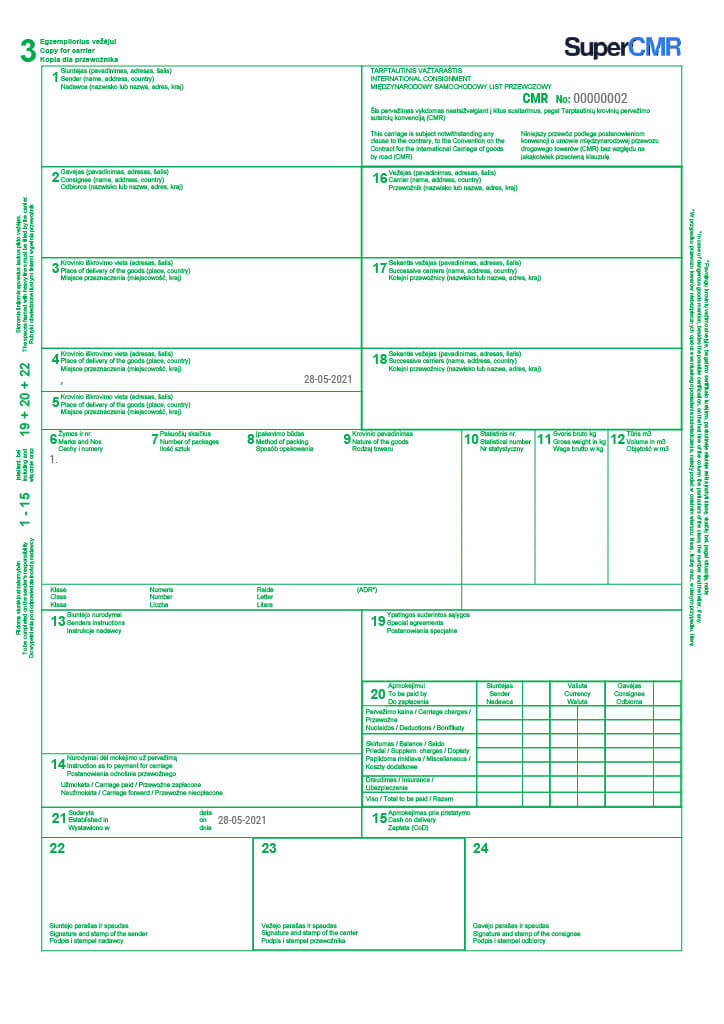 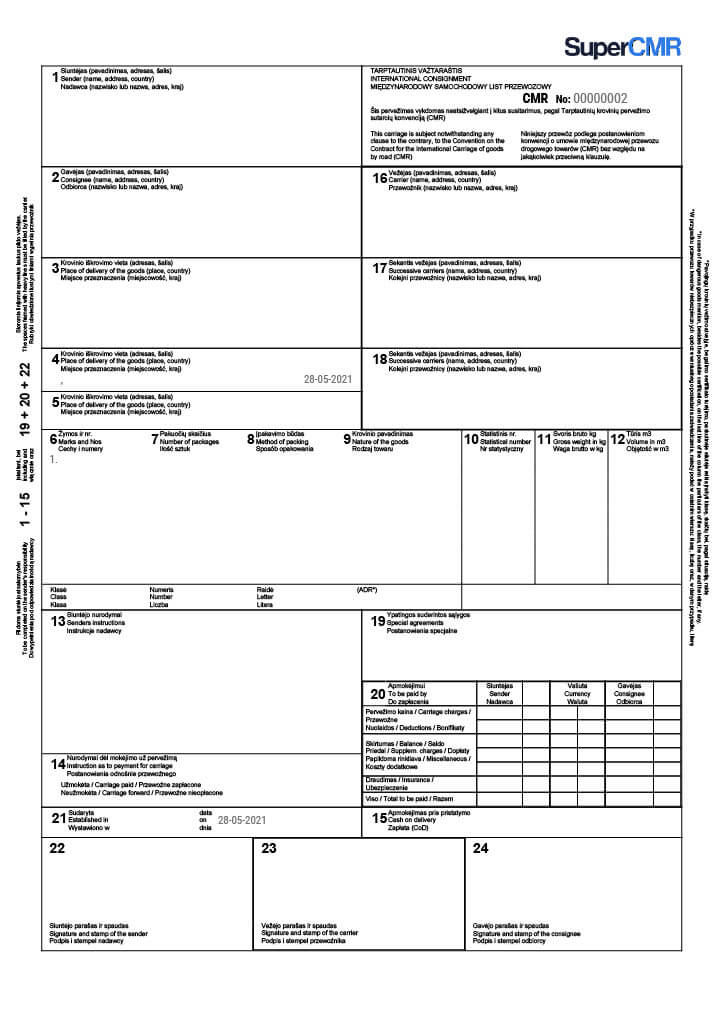